The Voice Wiki
Register
Don't have an account?
Sign In
Advertisement
in: Season 13, Season 13 Contestants, Contestants,
and 23 more

She was eliminated in the Battle Rounds after losing her battle against Karli Webster, but was stolen onto Team Miley.

After her loss in the Battles, Addison continued to garner a fanbase, yet she was often overlooked as a finalist until her coach advocated for her on the show by sending her into the Top 12 live shows. Emerging from the shadows, her emotional voice and slow vibrato won the love of America, receiving the first iTunes multiplier in Season 13, earning five more in her journey, and even stayed on the iTunes Top 200 weeks after her performances, emerging at the top of the competition week by week, propelling herself into the finale. In the finale, she performed well and all three of her songs reached the Top 10 on iTunes. This, however, was not enough to surpass Team Blake's Chloe Kohanski, placing her second overall.

"Addison had never been on a plane before flying out to audition for The Voice. Raised in Fort Wayne, Indiana, Addison started singing when she was only four years old. When she was nine, her father bought a record store that gave Addison the opportunity to explore many different genres and musical influences. She began songwriting when she was 11, and recently, her father built a stage inside the shop so she could perform. Addison's mother has several jobs, including being a musical therapist at nursing homes. Addison loves to help her mom by singing at the nursing homes and getting the residents excited about music."

Addison during the Top 11, performing "A Case Of You" 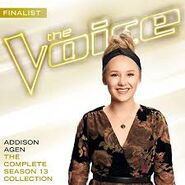 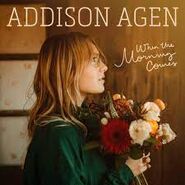