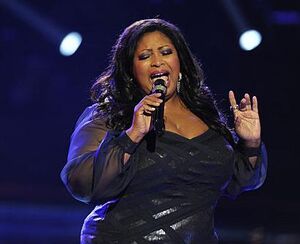 Kim Yarbrough competed in the second season of The Voice. After having 2 judges turn around in the blind audition, she chose Adam Levine as her coach. In the battle rounds she sang "No More Drama with fellow team-mate Whitney Meyer. After the battle, Kim was crowned the winner. In the live performances she sang Rolling in the Deep by Adele. In the eliminations, she was one of the bottom three on her team. For her song she chose Spotlight by Jennifer Hudson. In the end, she along with Karla Davis were eliminated. She came in 18th Place out of 48 contestants.