Christina Victoria Grimmie (born March 12, 1994; died June 10, 2016) was a singer-songwriter from Marlton, New Jersey who placed 3rd on the sixth of The Voice. She was a member of Team Maroon 5 lead singer Adam Levine.

Christina first started her career on YouTube under the name zeldaxlove64 and now has more than three million subscribers and counting. Her YouTube popularity landed her an opening spot on the Selena Gomez's tour, but she has time to land a record deal before her death. The Voice was her shot to make it big outside of the online world.

20-year old (19 at the time) Christina Grimmie auditioned for The Voice with Miley Cyrus' "Wrecking Ball". She turned all four chairs around, receiving unanimous praise from the coaches. Christina choose Adam to be her coach after he tells her she has the potential to be a "huge star". In the first Battle Round, Christina was paired against Joshua Howard to perform "I Knew You Were Trouble" by Taylor Swift. Adam noted that he believed there was more to be seen from Christina, advancing her to the next round. In the second Battle Rounds, Christina sang with Sam Behymer, performing OneRepublic's "Counting Stars". Blake compared to her a stick of dynamite, and that her voice "really cuts through". Shakira said she displayed more maturity and confidence than Sam, leading Adam to take Christina to the Playoffs. In the Playoffs, Christina sang "I Won't Give Up" by Jason Mraz, dedicating it to her mother.

On June 10, 2016, Christina was shot by a lone gunman named Kevin James Loibl, who later killed himself, after a show at the Plaza Live in Orlando, Florida. She was rushed to a hospital where she passed away just before 11 p.m. local time.

This article is a stub. You can help The Voice Wiki by expanding it.

Jacquie Lee is a 16-year-old singing contestant from Colts Neck, New Jersey, but she was 16 when she was on the show. Her birthday is June 25, 1997. She performed Amy Winehouse's single "Back To Black" in the blind auditions and ended up on Team Xtina with Christina Aguilera as her coach and won second place in The Voice finale. 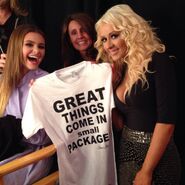 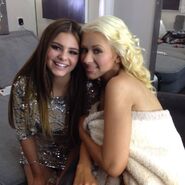 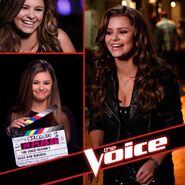 Danielle Bradbery (born July 23, 1996) is an American singer from Cypress, Texas who was a contestant on the fourth season of The Voice, becoming the youngest winner at the age of 16.

She was decleared the winner of season four on June 18, 2013, becoming the first country artist to win The Voice.

Danielle used to hate performing. She would only sing in front of her best friend and her mom. Even one time at Thanksgiving, she hid under the table and sang a song because she didn't want anyone to look at her. She has said in many interviews, Blake has told her to be herself onstage and have fun. And now she is performing in front of thousands of people!

Bradbery was born on July 23, 1996 in League City, Texas to parents Danny Bradbery and Gloria Redden Martinez but moved to Cypress. She attended Cypress Ranch High School. Bradbery has an older sister named Monica and two younger half brothers, Drake and Drew.

At the blind auditions on March 25, 2013, Bradbery performed Taylor Swift's "Mean", prompting Adam Levine, Blake Shelton, and Usher to turn their chairs. Bradbery then chose Shelton and remained on his team. At the Battle rounds, Bradbery faced Caroline Glaser where they sang the song "Put Your Records On", Bradbery was chosen over Glaser, in the process advanced to the Knockout rounds. During the Knockouts, Bradbery sang "Jesus Take The Wheel" against Taylor Beckham in which Blake selected her to remain in the competition, sending home Beckham. During the Top 16 show, she sang "Maybe It Was Memphis" and was voted through by America into the next week. The following week, the country singer sang a rendition of Carrie Underwood's song "Wasted." During the Top 10 playoffs, Bradbery sang a rendition of "Heads Carolina, Tails California", which became the first song of the season, and only song of that round, to reach the iTunes top 10 charts.

During the Top 8, Bradbery sang a soulful rendition of "Grandpa (Tell Me 'Bout the Good Ol' Days)." In the Top 6, she sangPam Tillis' "Shake the Sugar Tree" chosen by coach Blake Shelton. That week, she also sang a powerhouse rendition ofSara Evans' "A Little Bit Stronger," ending the song with a high note through the final "stronger" and "yeah" run. During the Top 5, Bradbery sang "Please Remember Me" and "Who I Am" which reached 6 and 4 spots respectively on the iTunes top 10 charts. During "Who I Am," she walked out through the audience to sing beside her proud mom, dad, and stepmom. At the finals, Bradbery sang the song "Timber, I'm Falling In Love" along with her coach Blake Shelton, she also re-sang the song "Maybe It Was Memphis" which would this time reach the iTunes top 10 charts and sang the song "Born to Fly" then she was announced as the winner of season four of The Voice. She had the most peak positions and most singles to reach the top 10 on iTunes during the season. Overall, she had more iTunes downloads than any other contestant in the show's history. At age 16, Bradbery was the youngest winner of The Voice.

On June 19, 2013, the day after Bradbery won The Voice, she was signed to a record deal with Big Machine Records. Her debut single, "The Heart of Dixie," was released on July 16, 2013. Bradbery's first studio album, self-titled Danielle Bradbery, was released November 25, 2013. On September 14, 2013, Bradbery performed on the WGTY Great Country Radio stage at the York Fair and sang four songs from her upcoming album, which were “Young in America”, “Dance Hall”, “Never Like This” and “Daughter of a Working Man”. Bradbery made her Grand Ole Opry debut on the historic stage of the Ryman Auditorium in Nashville on November 12. Along with her Opry debut, Bradbery will embark onBrad Paisley‘s Beat This Summer Tour. On November 17, 2013 Bradbery sang the national anthem at the opening ceremonies of the 2013 Formula 1 United States Grand Prix. Her song "My Day" was featured in the Sochi 2014 Winter Olympics as she was chosen to be "the voice" of the Games' promotional campaign that partners NBC Olympics with The Voice.

Bradbery joined Hunter Hayes as a special guest on his We're Not Invisible Tour starting March 20, 2014.

Brynn Cartelli was a contestant on The Voice Season 14 as a member of Team Kelly. Her blind audition of the Labirinth song "Beneath Your Beautiful" turned two chairs. She ended up picking Kelly over Blake, and advanced on Kelly's team until the Finals, where she ended up winning the show.

Brynn can be seen singing in home videos as early as age four. At six, Brynn joined a local theater program and established herself as a singer through school talent and variety shows. She balances her musical pursuits with a busy school schedule and playing lacrosse. Currently, Brynn plays at local coffee shops and small venues, but she is looking for bigger audiences.

Carter Rubin is a singer from Shoreham, New York who was a contestant on Season 19 of The Voice. He is a member of Team Gwen.

Carter Rubin grew up in a musical family and was inspired by his grandfather, a guitarist and backup vocalist for Jay and the Americans. Carter loves singing and playing music, especially with his older brother, Jack, who has autism. They perform together at their family's autism foundation, which surprises families with trips to amusement parks. Outside of the foundation, Carter also performs in his school's musicals and various community events.

Ranked #3
on this wiki